First half of the seventh season of School for Young Physicists

This season marked the seventh anniversary of the main project of our YM section – the School for Young Physicists (SYP). Each month, around 200-250 students from schools all over Latvia gather in the University of Latvia for an entertaining Saturday and to learn some extracurricular physics.
Sessions are held each month, each with a different theme. Every session starts with two popular lectures, 40 minutes in duration, held by physics students of various levels in University of Latvia. In these lectures, topics that generally are not discussed in school are presented in an entertaining manner. Thereafter, participants take a 30-minute break and are treated to a lunch with sandwiches and tea. Then follows the practical part, in which students themselves put the things they’ve just learned to the test. Afterwards another break is held in which students are again treated with food, this time with sweets such as chocolate and cookies and tea. Lastly, a professor or a specialist in the topic is invited for a more in-depth lecture.
A competition called the "School cup" is also held during the season, in which teams of 5 students representing their school do creative tasks assigned to them to come out victorious. Eternal glory and different prizes await for the winners of this competition. This season, 15 different teams ar rivaling for the School cup.

SYP7-1
On September 24, the seventh season was kicked off with a session titled "Mythologics" in which we discussed how using relatively simple knowledge of physics one can evaluate the plausability of different claims.
The session started with two popular lectures. First, Ģirts Zāģeris analyzed multiple scenes from popular movies and assessed whether, per laws of physics, they could occur in our Universe. Second, Oskars Sjomkāns engaged in a more philosophical discussion about physics itself.
In the practical part, students were tasked to evaluate the physics behind a scene from the popular animated movie "Up", in which a house was lifted using balloons filled with helium. They weighed how much a balloon filled with helium could lift and calculated how much force would be needed to pull a house off the ground. Further, they experimented to determine whether the model for the force required to pull out a pile from the ground was correct - after all, the model accepted a bold claim: that the ground can be described as a fluid putting pressure on the foundations of a house.
Lastly, in the in-depth lecture, a professor of the University of Latvia Ruvins Ferbers talked about how even the biggest of giants in science historically have made errors, some significant to the evolution of physics. 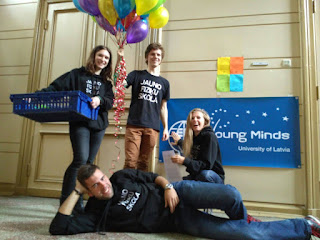 SYP7-2
On October 15, the second session of SYP took place. This time, the physics of sound were the topic, and the session was titled "With a physical undertone".
Students were divided into two groups by age and three popular lectures were held. The younger group first listened to a crash-course of acoustics as they had not yet learned it in school, while the older group was introduced to concepts they too had not seen in school - Fourier transforms and how they are used day to day. Both of the groups later listened to a lecture about the wave nature of sound.
Later, the participants tried to make their own musical instrument. They measured and calculated the properties of rubber bands to make a string instrument that would produce a desired frequency of sound.
Lastly, Tija Sīle talked about how a sound waveguide forms in the depths of ocean that lets sound waves travel big distances with small losses of energy. 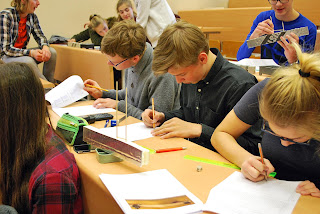 SYP7-3
On the November 12, students gathered to participate in the third session of SYP7 which was titled "Transmitted!" and was about radioelectronics.
The session started as usual with two popular lectures. First, Ģirts Zāģeris explained the physical principles of radio transmission, everything from transmitting a signal to detecting it. Along the way, he explained what FM and AM stand for and what the numbers on the radio mean. In the second popular lecture, Juris Venčels very thoroughly went through all the components that reside in a radio and talked about their applications.
In the practical part, students partook in the assebly of their own radio receiver from simple electronics parts. They built a circuit that could recieve AM transmission that was generated by us in front of the auditorium. 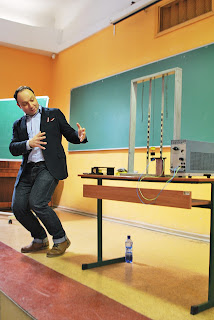 Prof. Kaščejevs, giving his lecture on an LC circuit

In the in-depth lecture, eccentric professor Vjačeslavs Kaščejevs talked about the heart of the radio - an LC circuit. During the lecture, students learned where the transmitted waves originate, and Kaščejevs slightly touched upon Maxwell’s equations.

SYP7-4
On December 10, the last session of the autumn semester was held. Titled "Calculate like a star", the topic for this session was astronomy.
It started off with two popular lectures. The first one, given by Elza Liniņa, dealt with the difficulties one faces when one wants to travel in space – starting with getting away from the gravitation of the Earth and then propelling oneself in empty space. In the second, lecture more fundamental cosmological topics were discussed by Mārtiņš Sandars – topics like space inflation and the curvature of space were discussed.
Later, in the practical part, students used parallax and their smarphone camers to calculate distances to various objects that were too far to reach, gaining insight in how astronomical measurements are made.


Lastly, a students' favorite Ģirts Zāģeris lead an in-depth lecture about the physics of black holes, looking at their mathematical origin and oddities that arise if one were to fall in a black hole.
Posted by University of Latvia Young Minds Section at 14:18