Tarzan and the magnets 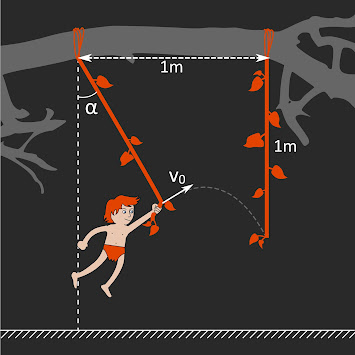 This semester has been quite different because of the situation in Latvia. When the lockdown started, we decided, instead of the regular video lectures, to post a difficult physics problem for students to solve. This has resulted in two interesting physics problems.

The first one was about Tarzan. The question asked, how could Tarzan swing from one vine to another with a starting velocity v, and whether the velocity would be large enough to get to the other vine and at what angle should he release from the first vine to catch the other.

The second problem was about a magnet system. One magnet was attached to a spring and the other one was able to freely move. The question was: what is the distance between the magnets such that the magnet attached to the spring slips and sticks to the other magnet. And the result of this was used to experimentally measure the magnetic moment of the magnet.

These problems posed difficulties to not only the students but also physics professionals. But quite a few students submitted correct solutions and the fastest correct submissions were awarded with a popular-science book.

To more challenging and interesting physics problems next semester.

Posted by University of Latvia Young Minds Section at 16:15