The 12th season of the School of Young Physicists

The 12th season of School of Young physicists is over. A lot has happened the past year, however, we finally see a light at the end of the tunnel. We were able to hold the final two sessions of the season in person, although still limited to hundred students, however, this limitation will be gone by the next semester. Four sessions were held this semester. In February we learned about electromagnetic waves and how they are used for communicating, looking at how technologies like Bluetooth and wifi work. In March physical chemistry was our task. We looked at chemistry through physicist’s eyes – through quantum mechanics. We explored the subject of chemical bonds, what they are and how we study them. Finally, we looked at Schrodinger’s equation, and some problems physicist encounter while studying quantum chemistry using it. After this, in April, we finally were able to host a session in person, and we started with forensic physics. We explored how physics is used for solving crimes, and in the experimental part we solved a murder. In the last session of the season, in May, we went on a journey to explore different technologies. For example, how our phones work, what are OLED screens and explored augmented reality technologies.

This semester has brought forward different challenges; however, we have tackled them head on and surpassed them. We are filled with joy that we were able to finally hold sessions in person and we are awaiting the next semester and hope to bring physics to more and more people. 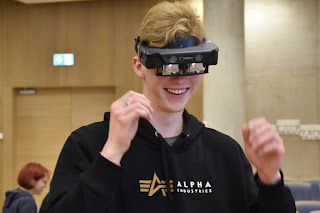 Posted by University of Latvia Young Minds Section at 22:25