In our first session back in person, we explored forensic physics. In the popular-science lectures we explored how physics is used in crime scenes to get information about what happened. The interesting part of the session was the experimental part, where we put the gained knowledge to test – we solved a crime ourselves.

In this crime a member of the School of Young Physicists was “murdered”, and we had to find his killer. There were 3 parts to the task. Students were given a list of suspects and their alibis and what they were doing at different times. Firstly, students had to narrow the time frame of the murder, this was done using Newton’s law of cooling. This allowed them to eliminate some of the suspects. The second task was blood splatter analysis, there was a sheet filled with blood splatter, and measuring the blood droplets, they could gain information on suspects height. The third task was ballistic analysis, figuring out the bullet’s trajectory. All the collected information allowed them to make a calculated guess at who is the “murderer”. They were able to check hypothesis by shining an ultraviolet light at their prime suspect’s hands, because the murderer’s hands were covered in “gunpowder”, which glows under UV light, they had one try, the most careful and attentive students found the “killer”.

This has been one of the more interesting experimental sessions we have had, students had a lot of fun and gave great reviews to the session, an interesting and fun experience for everyone. 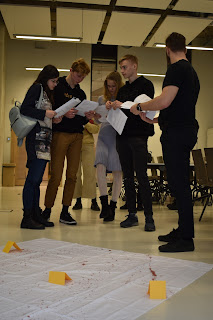 Posted by University of Latvia Young Minds Section at 22:26