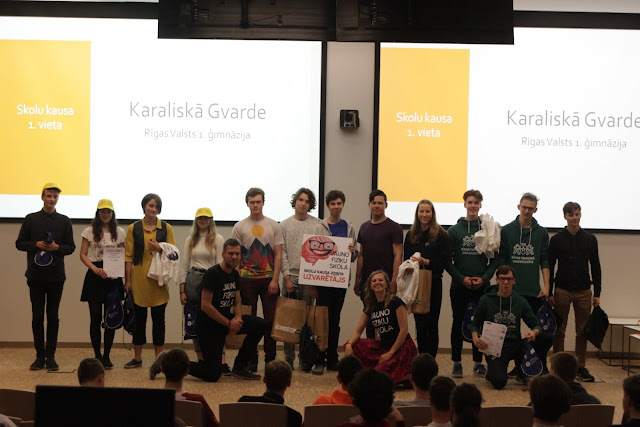 This past academic year already the ninth season of SYP took place. It was a success – it continued the body of work done in previous years with turnout remaining stable at a strong 200 students each session. Furthermore, it seems that our team is also improving the quality of sessions, as this year posted the highest average mark for each session as graded by students.

Most sessions this season were quite outside of typically discussed topics in school – for example, we had sessions on explosion physics, cold physics, nanophysics, fluid dynamics and even symmetries and fractals. Highlights of experiments include observing the transition between laminar and turbulent flow, finding the fractal dimension of Latvia’s contour and building a model of a car’s dashpot amortization. During that session, a professional racer also headlined the final lecture of the session.
Furthermore, this year also saw continued collaboration with other cities beyond the capital of Riga. SYP regularly visited Kuldiga, Ventspils and Valmiera for special sessions. Agreements are already in place to continue this tradition next year.
Our team has also looked for outreach opportunities beyond the classroom, and therefore SYP also took part in the 2nd Physics Festival in Riga, and helped organize the European Physics Olympiad, which took place in Riga this year. Right now, during the summer, some members of our team represent SYP in various educational camps by giving lectures on topics in physics, mathematics and programming.
The annual School Cup also took place for the fourth time, with the team "Karaliskā gvarde" from Riga State Gymnasium No. 1 claiming first place with a commanding lead over the rest of the competition. Congratulations to them!
This year was also unique because SYP (and the rest of the department) changed its home to a new, modern building! Our new facilities allow us to better accommodate the large numbers with spacious and contemporary equipment. We are excited to return to work in September, when we will be able to fully utilize the advantages provided to us by our new home.
Posted by University of Latvia Young Minds Section at 23:37